Show off your games, demos and other (playable) creations.
Post Reply
53 posts

Loved how cool the interface is, keep this going

FlattenedTesseract wrote:Cool project! Any Idea on when you're going to make it downloadable?

I know that, but can you make a github repo or something so that we can try out stuff with your (W.I.P.) game?
Top

FlattenedTesseract wrote:Cool project! Any Idea on when you're going to make it downloadable?

I know that, but can you make a github repo or something so that we can try out stuff with your (W.I.P.) game?

I don't plan to release this one for free... so, like I said, I might consider something like an early access, to allow some people to play with the sandbox mode and also keep updated builds.
@nunodonato
bit outside the box
Top

Have you thought about putting minimize (collapse) and close (delete) buttons in the titlebar of the nodes instead of having to press H or delete?

You already seem to have a perfectly working GUI system. It should be simple to add two buttons to the titlebar area. But I don't know how your code looks so I can't talk. lol
This is my Twitter. I say funny things sometimes.
You can get in the car and you can drive the car, but when you get to the Circus, it's always closed and all the clowns have died.
Top

Ironed out a ton of bugs in these past days!
Now i've built a simple demo blueprint to show how you can do a division with the nodes.
Link to the step-by-step video, below 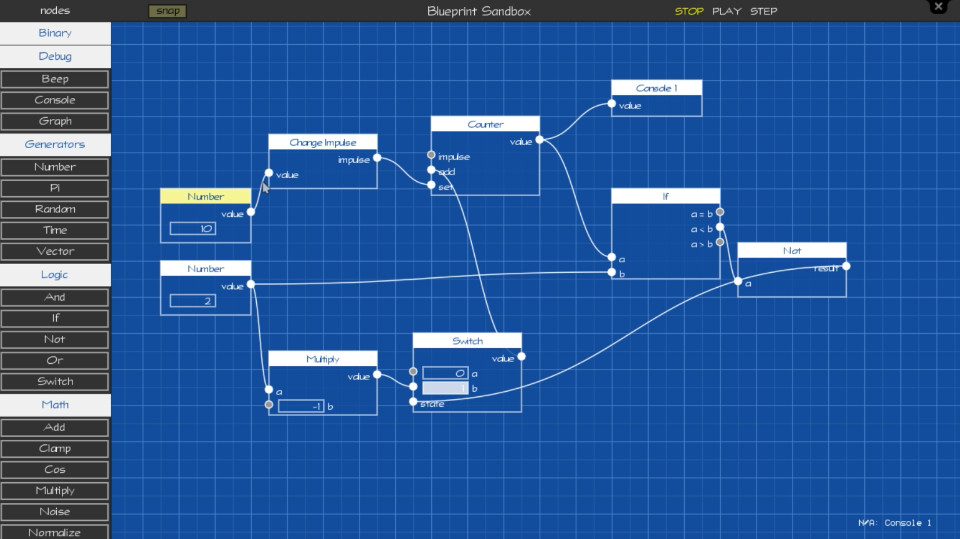 Video with explanation:
@nunodonato
bit outside the box
Top

Dev video #6 is up with some more new stuff

Today I've also posted on my blog an important announcement regarding an early access to game, which I'm pasting below.

This was quite a long and fruitful week of TBM development. As usual, I’m a bit lazy to update this blog, so if you want to keep in touch more regularly and see all the new stuff as it comes out, better to connect to the devlog on tigsource, indiedb or steamconcepts.

I created a playlist on my youtube account dedicated to TBM dev videos, and right now you can watch a bunch of them, where I demo and explain all the new features that got added and a few other ideas about TBM. Watch them all to catch up on the news! They are all only 4-6min long.

I’ve been receiving great feedback from several people, and many have shown interest in playing with the game right now, just to use the sandbox mode, even if there are no levels to play yet. This is my official reply:

TBM will feature (at least) 25 unique levels, that will demand you to use different skills (creativity, logic, math) in order to progress through the game. Apart from this main “campaign” mode, you will have access to a Sandbox where you can just build and play with blueprints (some of which you can save and re-use in the game’s levels in order to aid your progress).

Although the sandbox mode is around 80% completion, the game itself is about 10%. I’d also like to point out that TBM will be a paid game (my estimate of price is around the 10$ tier), and the release date should be Spring 2016.

Having said that, I do consider a possibility of opening up Early Access to TBM as that would give you the opportunity to play with the Sandbox mode, and to play the levels as they get done. It would also help me as well, as I would get the chance to receive valuable feedback from players and, who knows, more interesting ideas to take in the game.

As a reward, the Early Access adopters would have access to the game at a huge discount (maybe 70%).

But doing an Early Access also demands more work and time from me, to prepare it, to create a tiny closed community, a way to give regular builds to players, etc. For now, I need to understand if there is really a sufficient amount of players interested in such a thing. So, if you are, I would request you to show your interest in become an early access adopter (either in IndieDB, Steam or other).

CanadianGamer wrote:it would be really cool if you could export your blueprints as .love or .jar files

I'm planning to have export/import blueprints, so they can be shared

it kinda messes up the whole *blue*print idea, but its cool to be able to change the bg color

Well, i have seen green, teal and even red "black"boards before, and metal coloured "white"boards too, so it shouldn't be an issue

(Though having a wrapped custom textured background would be cool, e.g. wood patterns, with the white grid overlay still being present... or one could change the colour of that grid as well...)
Me and my stuff

True Neutral Aspirant. Why, yes, i do indeed enjoy sarcastically correcting others when they make the most blatant of spelling mistakes. No bullying or trolling the innocent tho.
Top
Post Reply
53 posts

Users browsing this forum: No registered users and 20 guests