Show off your games, demos and other (playable) creations.
Post Reply
31 posts

Have you been watching Mahou shoujo ikuseikeikaku? xD
Top

Soon I will have been, thanks for the heads-up. The premise is pretty cool - like a full series out of something that's a side story in my game.
curious handcrafted games
Top

Alright, so as the most observant may have noticed on Twitter, I'm dedicating this weekend to a personal game jam kind of stretch. Expect less mystery and more gameplay previews for ~72 hours.

Oh and I thought it best to call this the "Summon Project" for now. Perhaps it better reflects how the upcoming demo route is like a pilot episode to an anthology series.

(Probably need to sweep out the obsolete/misleading information from this thread at some point...)
curious handcrafted games
Top

I've read through your posts, and while it is visually incredible, I'm not sure as to the core gameplay loop or loops.
Learning to Löve.
Top

Right now I'm working on the tutorial battle, so I hope seeing that in action will clear things up.

But as a sneak peek, I've kept the system very simple. In the demo's RPG-style battles, both parties have 4 stats: Each monster has their characteristic special ability which consumes one stat and changes another. And that's all they can do! Think of it as having a party of only one-trick ponies.

In typical conditions, battles are 2v2, to give you a real choice each turn. You also need to swap monsters often (known in-game as SUMMONing) to win tricky battles and convince former enemies to join your party.

Battles end when either party's Cunning and Empathy runs out. They don't have the energy to keep fighting anymore. Once that happens, the side who did the most damage is declared winner.

That's all there is to it, but I've found there is a lot of rock-paper-scissors strategy involved, and that each individual battle style is very revealing of a character's personality.
curious handcrafted games
Top 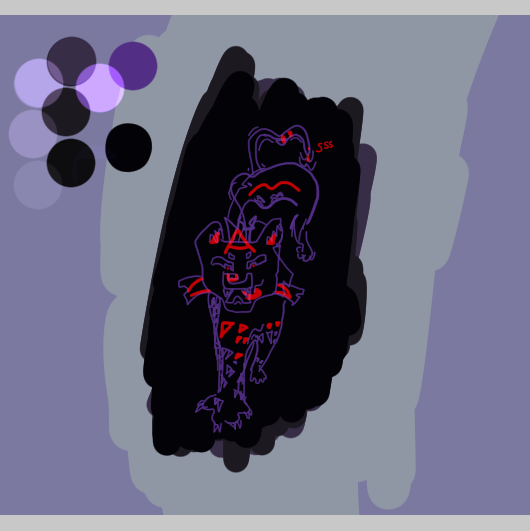 Hyaa. It's me. Panther A. Long time buds etc.

You know. I hate to ask. Would you guys fulfill another request?

(Lest I eat you.)
curious handcrafted games
Top

I am still completely clueless about what the game is going to be. More gameplay gifs or videos please?
Top

steVeRoll wrote:I am still completely clueless about what the game is going to be. More gameplay gifs or videos please?

I have *just* the right video for this.

My game's main story chapters are played like a rail shooter, and the levels look... well, basically just like that actually! In this video's case, your job is merely to pick who in your party will sing the next line of the song. You're given 3 obviously wrong choices - and 1 obviously right choice - to progress the main character Vespa's quest in a (J)RPG world.

Ah, except that Vespa is not the star of this game.
curious handcrafted games
Top

It's amazing how with every post you make things get more cryptic.
Keep going!

I think it is important to mention that I personally am not a fan of the cryptic. The following is quite simply my opinion but in a post No Mans Sky world I think it is relevant, I don't want to derail this thread nor do I want to discourage the dev(s) as I think this game looks great (and I love FLCL.)
The flaw with cryptic hype is that I now have my own ideas as to what this game is/should be, and I do have those ideas, I have thought more about this game than any I have seen on these forums to date. Problem is that if the game fails to meet my now frankly unrealistic expectations then I will be disappointed, this will lead to a lot of saltyness from your end users.
I think you are a marketing genius as I really am excited about this release but at the same time the more excited I get pre release the larger my disappointment when the game isn't everything I thought it would/could be.

Again, this is all just one mans opinion. Feel completely free to disregard it and also sorry for the off topic post.