Show off your games, demos and other (playable) creations.
Post Reply
9 posts • Page 1 of 1

This is a project I've been working on for a little over two weeks now and I *think* it's going relatively well, if you want to try it out for yourself I've attached a .love with the most recent version, which now restricts tile rendering to the camera's fov to not lower frame rates. A 300x300 map works at a smooth 60fps with only around a second of load time to initialize map data for drawing. The game uses RGB values to get tiles for compressing map images rather than having massive map files that, in my opinion, would be harder to create a reader for than a pixel map.

Collisions for entities are mostly done, with the only thing not done is actually responding to collisions in a way that works at pushing an entity backwards; Collisions for tiles has not even been started on yet. Key Presses are handled by a script holding an active and deactive table that gets grabbed by system when a key is pressed or held.

That's pretty much the basics explained, the code is relatively clean so it shouldn't be hard to see how things work if you want a more in depth look on what's happening on the inside.

Any suggestions on a name, or theme the game could be built on are always welcome!

I just tested it on an old PC with Love 11.0. The blue ball seems to move at around 1 tile per second, which seems very slow unless I'm misunderstanding the intent. (But again - old PC, so whatever.)

I like how you allow simultaneous vertical and horizontal movement. That's a nice touch!

IMO, it's too early for a title unless you really know what the game is about. There's not enough yet for me to offer any suggestions, other than to say kudos and keep at it!

I agree that the movement is too slow, movement is based on velocities so it was pretty easy to add movement both ways.
I'll update the .love for faster movement as I dislike how slow it is too. You can now have 2 added to velocity instead of 1, which feels quite fast.

I'm not sure how you're drawing the tiles, but they seem to bleed when moving: 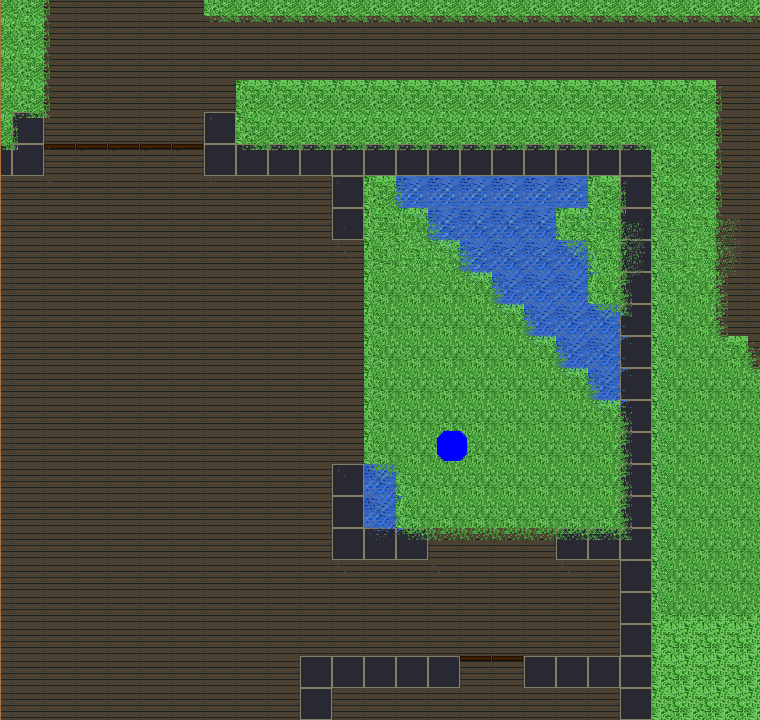 I'm not sure how you're drawing the tiles, but they seem to bleed when moving:
Image

Woah, never seen that happen, weird.
The game draws quads from a tile sheet to create tiles, and should draw the correct tile, I'm not sure about bleeding as it hasn't happened to me yet, hmm.

This is kind of cool except for the bleed issue. If you fix it I'd like to know what caused it.
Back in the saddle again.
Top

I don't get the bleeding issue on my system, for either .love file above.

FWIW, I've only tested on my Linux (CentOS) system, which is both ancient and crappy. I have *not* tested on my main Win10 PC.
Top

No bleeding issues on my system either.
Top

FWIW, I've only tested on my Linux (CentOS) system, which is both ancient and crappy. I have *not* tested on my main Win10 PC.