Show off your games, demos and other (playable) creations.
Post Reply
9 posts • Page 1 of 1

A falling gem style puzzle game! Crystal Crash features original artwork and sound by myself and retrotails. Drop the crystals and line up three or more of the same color in any direction to burst them. Retrotails is the lead programmer, assistant artist, and pixel shader writer. I am the assistant programmer, debugger, and lead artist.

Controls are arrow keys, space/enter, escape, and F11 for fullscreen.

Features: Retrotails and I have spent the last two or three months putting this together. It's gone through many iterations of features and total rewrites, and a tremendous amount of code I would not have been able to do without him. We've polished it to a mirror finish but there's always a chance there could be a bug or two floating around so any and all feedback is appreciated.

Sometime in the very near future we plan to release this on the android as well. All of the code is tested and functuional on smartphones and tablets alike with the current version of love-android but there are a few small issues before we upload it to Google Play. The game will always be available free as well as ad-free in some form or another from here until forever.

Screenshots and LOVE file below.

Advancing levels is much easier now. Game speed and level increase at every 10,000 points. Points accrue faster in higher difficulty.
No score-based leveling in Flash mode, instead a level and increase speed for every four Flash levels cleared.
The Flash gem in Flash mode now stands out better.
Due to issues with old configuration files, when the game crashes it resets the internal configuration. This unfortunately will wipe high scores but will only happen ONE time.

Update v1.0.1
I fixed the game board transparency (you can see the pretty shaders through it now, and the enter key now functions the same as the space.

This game feels and looks good. I played Flash on Normal mode and enjoyed trying to get to the flashing block.

I can tell a lot of time was spent polishing this game and making it look and feel awesome.

This awesome! I love puzzle games like this. I've played a bit and so far I have only a couple of remarks. I had trouble reading the letters on the "Enter your name" screen: 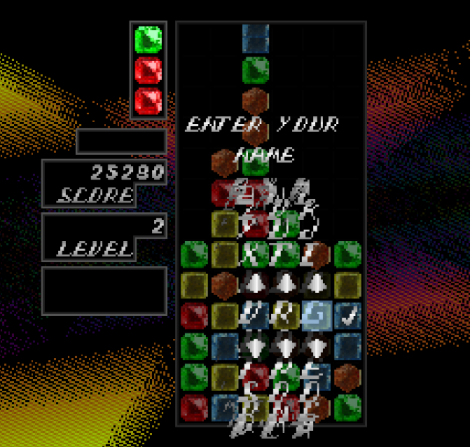 The "letter wheel" is a very nice touch. I also found a little bit long to reach a new level (I played on "Normal"). The backgrounds are really cool, especially the "default" one. The game is very polished and really well done! Thanks for sharing it!!

The letter wheel effect is awesome, great job on that

! The music reminds me of a haunted house

, can't say I can ever remember seeing diagonal gem matching in these types of games.
Great game

edit: although i'd agree with verilog, the font was slightly hard to read.
Top

I fixed the game board background not being semi-transparent, so now you can see the pretty shaders! Also, the enter key now functions as space as well as F11 toggling fullscreen. I also made the background a little darker on the name entry screen so it's easier to see the name entry font.
Top

You've done a good job with this! I love Columns-like games, so this is up my alley. The sounds, particle effects, and colors add up to make a pretty enjoyable experience.
Top

Just wanted to say that a major fix is in as of the new version, and...

That's right! You can check out the itch.io link on the first post, or on Google Play!
Top

Double posting, because the newest update introduces a few bug fixes and changes that modify how the scoring works. I hope everyone is enjoying

Wow, that's actually a quite nice Tetris-esque game. I like the music as well!
twitter | steam | indieDB

Users browsing this forum: No registered users and 54 guests