Another Kind of World (Version 1.3)

Show off your games, demos and other (playable) creations.
Post Reply
23 posts

Another Kind of World (Version 1.3)

Just wanted to post my finished LD48 game here for you to play.
It's a platformer where you throw bombs and stuff 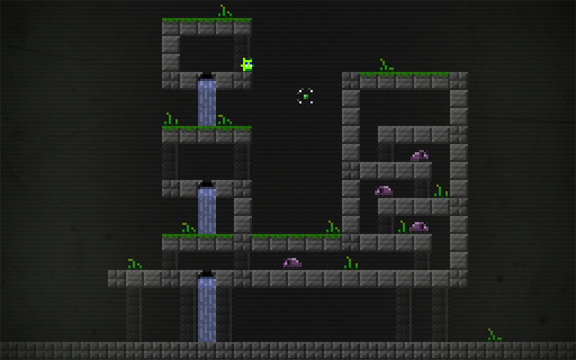 Latest version of the game:
Another Kind of World 1.3

There isn't a lot of levels, but it's easy to make your own. If anybody is interested I will put together a guide on how
it works. Have fun!

One thing I noticed is that you tell the player what keys they can use on the second screen after they've already used them to get to that screen. The tutorial should really be on the first screen. Or a movement tutorial first to get the player to the door, then when the player gets to the first wall tell them which key jumps. Then when you encounter the first enemy, tell them how to throw bombs.

Also, animated grass. Would be nice.
This is my Twitter. I say funny things sometimes.
You can get in the car and you can drive the car, but when you get to the Circus, it's always closed and all the clowns have died.
Top

Yea... since the title-screen was ruched I didn't really think that one through

I will probably change the first screen to not use the character-movement. Also... yes animated grass would be nice...
Top

Nice!
Suggestion: make you own mouse cursor and set love.mouse.setVisible to false
Top

Great game, feels very polished. Did you code all the platformer physic stuff in 48 hours or did you use some base code? Saving would be great, I accidentally hit escape in the 5th level

Fantastic, and congrats on such a fantastic game! Can you link the ludum dare entry?
Missing Sentinel Software | Twitter

This is really neat, but it'd be nice if you'd grab the mouse.
Top

A guide/explanation on how the game uses and loads the levels will be useful. Rather interesting and well polished game, well done.
Top
Post Reply
23 posts