I don't have a solution yet either. It seems pretty straightforward. I would expect everyone to have the same problem. Hopefully, someone will post a solution soon. I'm anxious to try this out.
Top

Sorry for the delay. Xcode 7 is more strict about how code is built for the iOS simulator compared to Xcode 6, and it was causing the prebuilt luajit library to be rejected when trying to link with it in the simulator.

Thanks, I'll try it out later and let you know!

Worked perfectly for me. Thanks, Slime. This is wicked cool!
Top

I wasn't awake when you asked about blurriness on IRC – in order to use the full resolution on iOS you need to have high-dpi mode enabled in the window.
Top

I'm happy to announce that I have also gotten a game into the iOS app store using this port! It's called Unshuffle and it's a relaxing puzzle game with lots of neat shader effects. Thanks so much for the iOS port, slime! For posterity, I'd like to mention as many of the modifications I made to iOS port's xcode project as I can remember. If anyone wants to know more about one of these, just let me know:
Here's the thread I created for the game.

Hi folks - great work with this!

How does code signing work with this? I can get this to come up in the simulator, but not on an iPad.

However I change the codesigning settings, it tells me I can't sign the 'love.love' bundle. Either I'm not on the team (a specific team number associated with the 'love.love' bundle) or I don't have permission to use that bundle ID. What's the straightforward way to test LOVE on a device?

I have XCode 7. I have a developer account - but not a paid membership. So far I've just been using XCode 7's sideloading to test my OpenFL apps. (Which uses ios-deploy.)
Top

So i have tried this out, but i get a couple of errors. I am a complete newb with Xcode and OSX, the answer might be very simple.But does anyone know how to fix this?

Ah, you'll probably need to make LÖVE link with the GameController framework. You can do that by clicking the "+" at the bottom of the "Linked Frameworks and Libraries" section here, and adding GameController.framework: 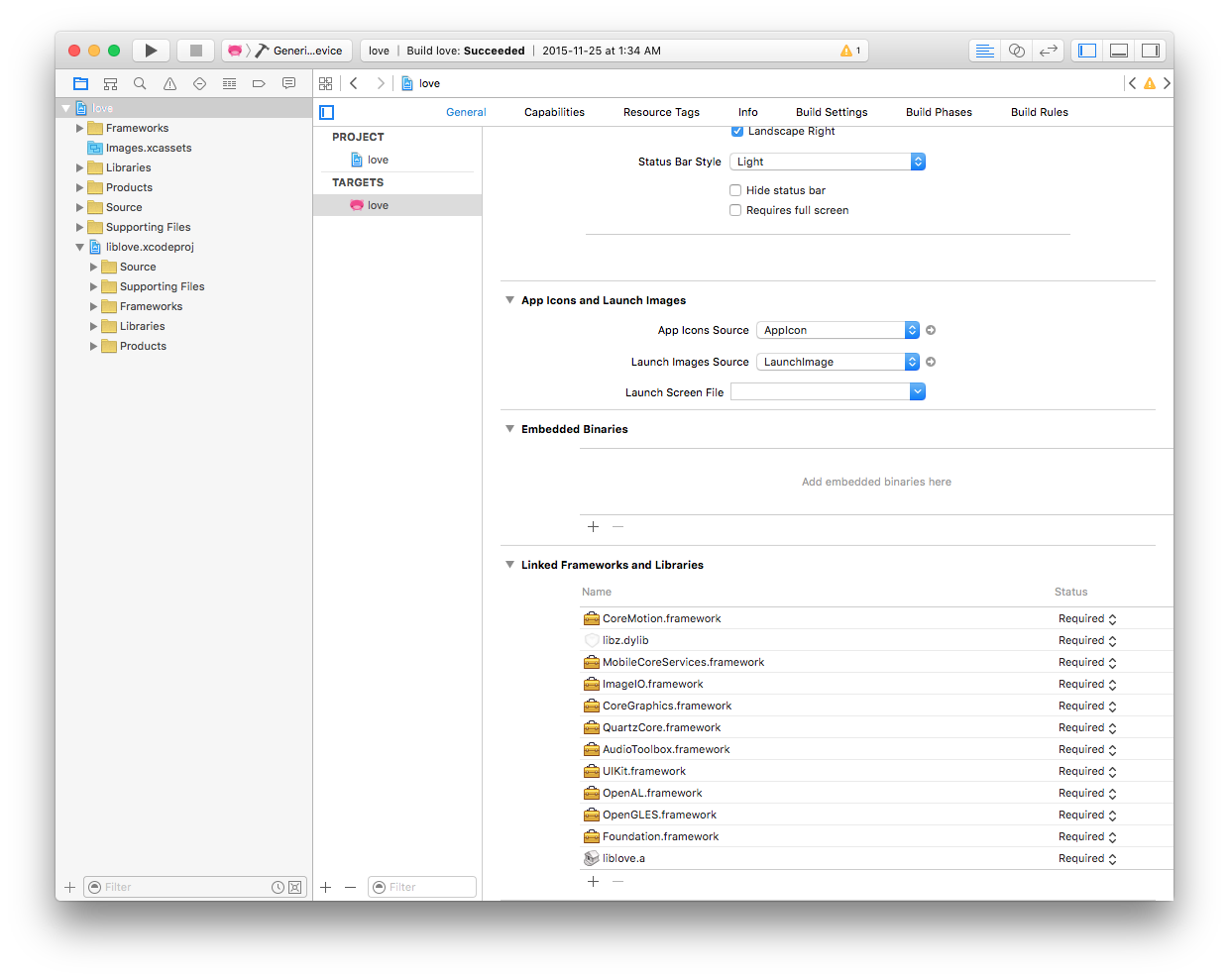 However, note that this version of LÖVE for iOS is deprecated, you should use the official version of 0.10.0 for iOS instead (which has this fixed I believe).
Top
Locked
130 posts

Users browsing this forum: No registered users and 10 guests