I've been working on a space game for the past month and have had reasonable success so far, so I've decided to release a bit of information about it.

The game is a tactical space-sim currently codenamed Gravity. It probably falls under RPG and RTS genres at times but most of the focus is on blowing up space-ships and exploring uncharted space.

First thing I will mention is that the majority of the art is 'borrowed' from the following games: Gratuitous Space Battles, Starfarer, SPAZ, and EVE-Online. I'm not too awesome at art so it's likely to remain this way until I find someone who can provide me with continual assets.

My basis for the project was wanting a single-player game with the depth of EVE-Online (combat, economics, sandbox), with less confusing and time-intensive mechanics. I love EVE but I feel it has a lot of barriers at times.
Inspiration for my game is taken from many existing games; I could probably fill a page just listing them, instead I'll explain how I came to this point.

Firstly, I wanted a galaxy I could roam freely in. I am not fond of boxing solar systems into small spaces like EVE and X3. There are many reasons for actually doing this but I feel space exploration takes a huge nose-dive when forcing the player to use 'warp gates' instead of exploring frontiers on his or her own.

Secondly, I wanted an environment that was procedurally generated and would live it's life without the player; Space rangers 2 is a great example of this, but I want to take the concept a bit further. Although I am unlikely to best SR2's personal-level AI anytime soon, my ultimate goal is to have expanding dynasties and corporations in order to give each galaxy a unique space opera feel and a real history of its own. The player can support any of these factions, or even grow his own empire, similar to X3. X3 actually had some great dynamic corporation mods created; I just wish the whole game was using these sort of systems from the get-go.

Although it's still a heavy work in progress, I also decided to add planetary-level landmasses that would feature dune-style conflicts for resources. Each of these planets can have facilities built on and will be routinely fought over for political or economic gain.
I still haven't thought of a good way to represent the land graphically, I'm thinking of using shaders to generate unique land-maps at this point, but I'm not sure it's really feasible on a large scale and I really don't know when Love2D 0.8.0 will be stable enough to use.
I've also avoided using render-to-texture for laptop support thus far, but I'm not entirely sure there is meaning to this as the game uses pretty serious processing/rendering power to begin with.

Thirdly, I wanted a top-down space shooter that could handle large-scale skirmishes, huge capital engagements and still provide a place for the smallest of drones/fighters. At the same time I didn't want the game to rely heavily on the player's reactions or his personal aiming skills, I wanted combat to be similar to EVE, where a ship of any size can excel if used intelligently.

Planetary combat:
Any passing space ship can fire upon facilities or ground units, and the reverse is true also.
Each planet is essentially just a flat landmass floating in space, rather than having it's own separate environment to fight in. This allows players to influence AI conflicts, build new facilities and conquer planets without interruption or a change in game mechanics.

Finally, I wanted to be able to play it all cooperatively, without any compromise.

Scale:
It takes roughly 11 hours to cross a medium-sized galaxy in a moderately fast frigate, without aid of a warp-drive. You can cross an entire planet surface in less than 20 seconds. 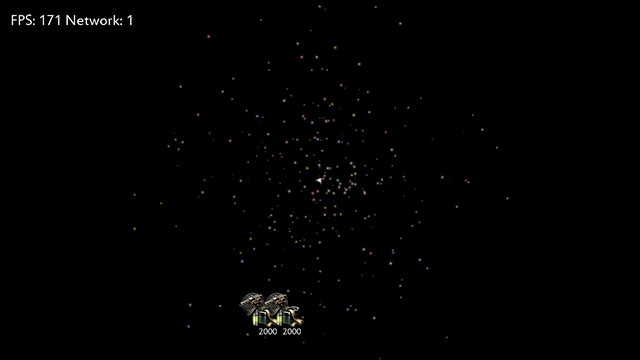 This picture shows how many star systems in a galaxy of this size (~400MB in memory), with ~1000 planets in total (between 1 and 10 planets per star) which are often packed with asteroid belts (each asteroid can be destroyed or mined individually).

Networking:
A skirmish of roughly 40 ships takes around 10KB/s per player in the immediate area of the skirmish. There is still a lot of optimization to be done but I feel it is a reasonable bandwidth figure at this time.
Players can drop in and out of any server at any time. It takes roughly ~5 seconds to join a server.

CPU usage:
Areas further from the player process slower, meaning the entire galaxy is still simulated, but only the areas a player can see are updated in true real-time by the server.

2. Modular ships supporting multiple turrets that can be aimed individually at targets 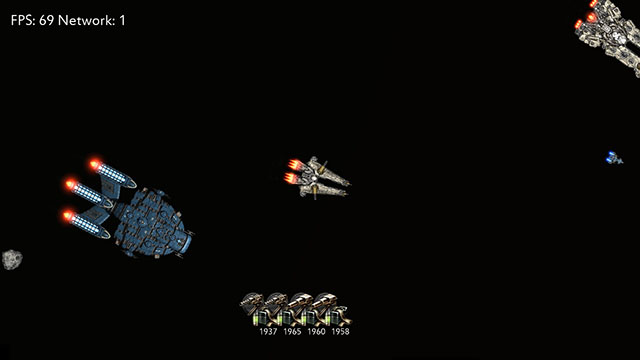 I've opted on a hard configuration for each hull. Every hull can provide bonuses to certain systems, sport a number of turret and missile launchers that the player can place modules on, but the player may not change the maximum number of turrets or bonuses to a ship.
Most hulls should offer a specific strategic advantage over one another and should hopefully not overlap roles too heavily.

3. Turret combat similar to EVE-Online, aiming to give real strategic depth in combat 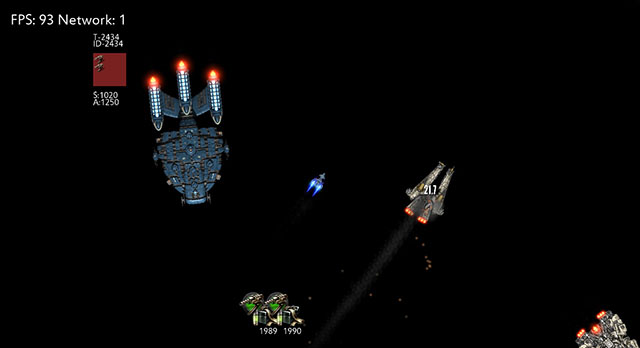 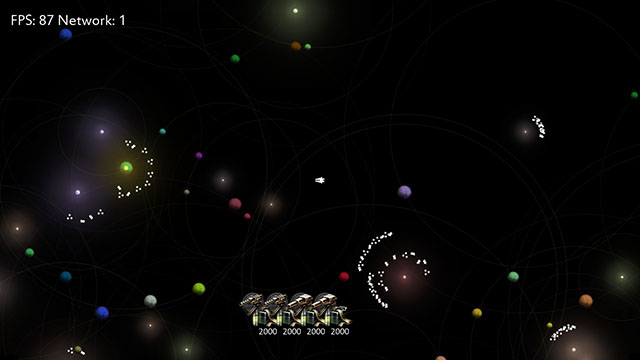 5. The player is not the center of the universe, everything happens with or without the player's intervention 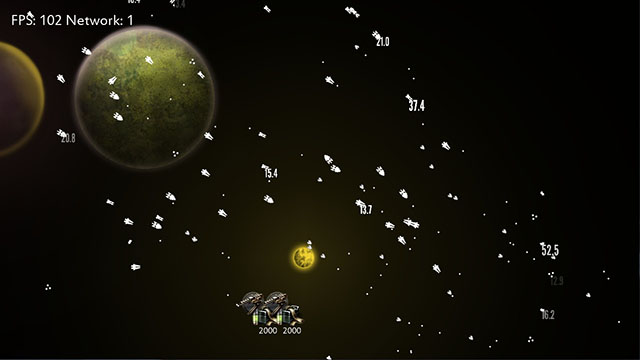 6. Support for hundreds of thousands of objects, all in real-time with reasonable bandwidth requirements 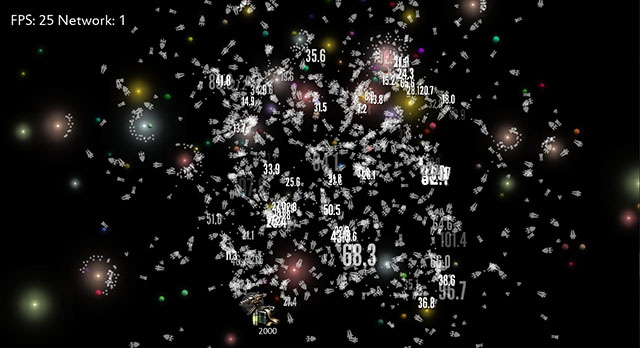 The theme will probably be very similar to Dune or Emperor of the fading suns, where in there are a number of competing houses, aiming for the emperor's seat.

The player's only real goal in all of this is to survive, preferably as rich and powerfully as possible.
I'm hoping to cover the majority of EVE's playstyles, from mining and manufacturing your own ships to put on market, to ruling entire AI alliances, with the ultimate goal of becoming emperor of the whole lot. I'd wager I'm still a long way before doing any of this though.

Sadly I'm not too sure how much longer I will continue with this project as there seems to be a great deal of 2D space games coming out in the next year, all with much better funding and complete teams in place. At minimum this engine might probably work for a few other genres, so perhaps I might end up using it for something a little more unique along the line if I don't continue with this. It's still fun to work on so it's good for the moment.

Currently I'm trying to think of an efficient way to add procedural nebula clouds to the mix, but so far I haven't thought of anything great. Nebula will be key to stellar travel as I intend to do solar/thermal powered warp which performs based on the 'temperature' of space; something like gliders soaring over thermals or sailing using wind.

Feel free to let me know what you think of the project, have any questions, if you can help with art, or think of any features you'd like to see; I'm a long way from having a fixed idea of the project so I'm still open to ideas.
Top

this is epic o-o
Top

First laser prototype, in which I procrastinate further on the nebula and planet issues! 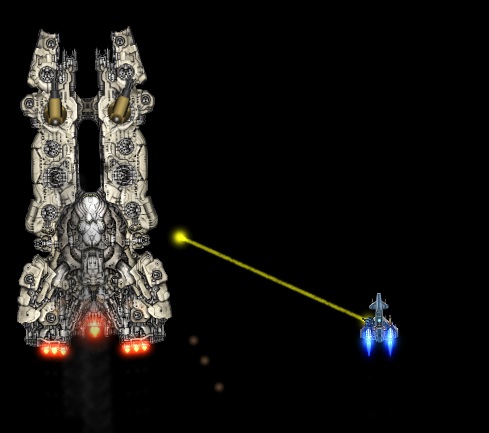 It still needs a bit of work but it's a start.
Prior to this all I had was a small projectile shell which was nearly impossible to see in flight!
Top

More of this, please!
When I write def I mean function.
Top

Is there a link?
Top

No sorry, I'm not particularly comfortable putting something out there so unfinished.

I also don't think there is sufficient gameplay for anyone to enjoy it in its current state even if I did release it.
I mean you can connect to each other and shoot things/each other up, but it's not exactly a riot.

I still have the following things to implement before I'd consider throwing out anything:

Nebula (a surprisingly effortful affair because I want a relatively unique warp system)
Planetary structures (easiest thing on the list.. if it wasn't for my indecision of how to draw planet surfaces)
Simple economy (enough so the player can buy ammo/fuel)
Inventory systems (UI .. groan)
Fitting system for ships ^
AI routines (the AI is hardly combat worthy)
Warp travel (I've got something basic in now but it's not exactly 'Warp!' material)
Sound system (uses ridiculous amounts of ram at the moment, though it works fine)

While I could probably do this in under a week, I can be pretty sloppy so who knows when I'll get these things to a satisfactory level.
I'll keep this thread updated so you'll know when that happens, if it does.
Top 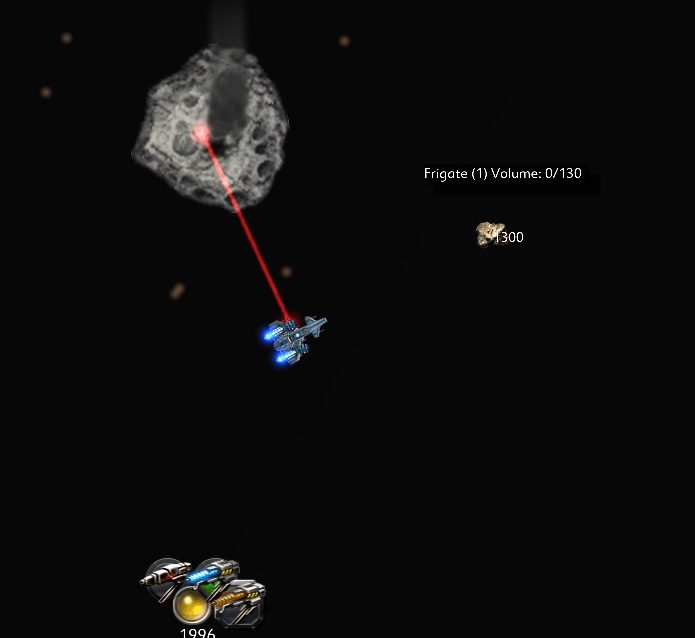 The rather early inventory system is networked so that multiple players can access the same containers at the same time. You can stack items and arrange them as you wish, but you can't actually split them quite yet.

Next up I think is depositing said rocks at the nearest refinery, or perhaps being able to loot wrecks of other ships.
Top

Wow, this is exactly what I wanted to play and tried to make. Beats the crap out of my version...
Top
Post Reply
51 posts

Users browsing this forum: No registered users and 37 guests