Show off your games, demos and other (playable) creations.
Post Reply
10 posts • Page 1 of 1

So I'm trying to make a video game for computers using LOVE and it's going pretty well so far. I was working on my game and created a bug that led to an interesting visual effect which gave me an idea for this game:

You're a bat and you live in a cave. Caves are super dark and you pretty much cant see anything - unless you are a bat. You use your natural ability of echo location to navigate a cave. This demo displays the visual effect in the dark cave environment. Click and drag your mouse to move.

Okay, so imagine this: You're this bat and you live in this huge cave. It's so huge that it's almost just as dark as it is huge. Over the course of a trillion years, a superior being allowed these bats to develop a superior method to seeing in the dark, which allowed them to survive on to this day. Echolocation. These bats can harness the power of their second brains and natural ability to make sense of their surroundings based on reflections! How does those bat do it!? Unfortunately, not a single person on this earth knows, but it's probably magnets.

So this is a demo of the top-down cave environment that the bat lives in. There's not much to do right now but fly around and see things like a bat might, but I still think it's pretty neat to try out. This cave is real big. This demo uses a procedurally generated 1000x1000 tile map which is 40000x40000 pixels large. To avoid long loading times, the map is split into chunks and loaded in the background as needed. There are a few collision bugs, but they shouldn't be too noticeable.

As for game play, maybe you'll just fly around and do bat things. Maybe go on bat adventures with your bat friends and just tear it up like bats do. I don't know yet.

The graphics are very minimal. Pretty much just points: 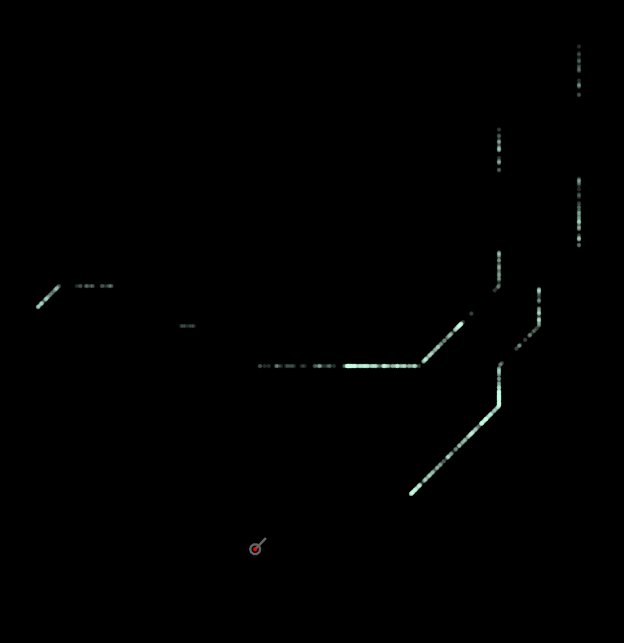 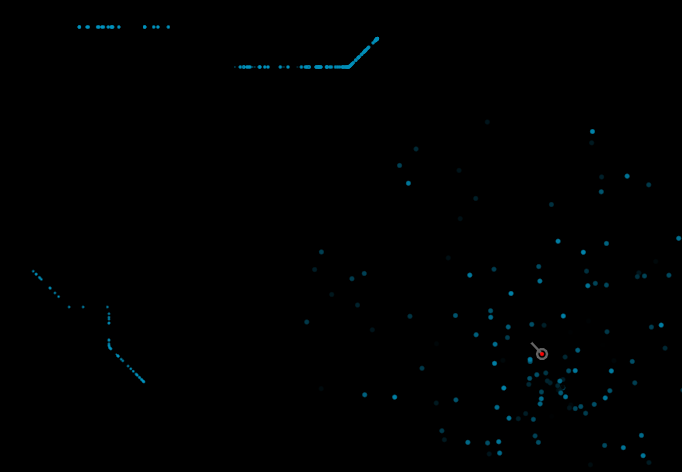 Though in fullscreen mode there were a few graphical problems.
I like where this is going to far.

This is amazing, now you just need a few more features and it would be a 8/10
Top

Hey, it's an interesting concept.
One suggestion I have is: try to make the gameplay centered around echolocation.
What I mean is, the gameplay should be entirely focused on your concept - echolocation.
Right now it feels like an overhead 2d game with a graphics filter on top.
8-Bit Commando | Collisions | Super Chains | SKULLMASTER'S ARENA
Top

I agree with ivan - you should take it further. I can see too much, even things that are not infront of me. It's too easy to navigate at the moment...

I also like where this is going. Once thing that came to mind, though, is that almost everything on your huge map is black - making it a large waste of pixels.
Instead, you could shrink down the map to around 1000x1000 pixels (very rough estimate - not based on any calculation) and render it using a shader...
You don't even need the map stored in a bitmap for that (although shaders are good with bitmaps, so maybe that's a smart idea). If you're not planning on having many other graphics in the game, I think this would be a neat way to do it. That way, maps could be even larger without any drawback.

On the other hand, never change a running system. Maybe it's not worth the effort - after all, your implementation works well.
trAInsported - Write AI to control your trains
Bandana (Dev blog) - Platformer featuring an awesome little ninja by Micha and me
GridCars - Our jam entry for LD31
Germanunkol.de
Top

Hey guys! Made some changes. new is in original post.

Thanks for the feedback. I had some ideas on how to make the sonar beam feel more echo like, so I mashed them up real quick to see what it'd be like.

Changes:
- use spacebar to send a sonar pulse
- sonar beam now propagates at a speed so that reflections can be seen
- You explode when you hit a cave wall

Not sure how I feel about how it looks right now. I'm beginning to think the original demo visual would be better used for a flashlight effect than an echolocation one. I'm thinking about adding static/moving objects that emit sonar pulses and seeing what kind of fun can be had with that.

Demo with these changes in the original post.
Top

will you add upgrades and stuff?
Top

I find it really annoying that I can't rotate without moving.
Why don't you always rotate to face the camera and only move when clicking?
It would make controls much easier. If you want it to be hard to navigate, you can always make the turning slower and moving faster (or acceleration/deceleration smaller). The way it's now it's more frustrating than challenging, in my opinion...
trAInsported - Write AI to control your trains
Bandana (Dev blog) - Platformer featuring an awesome little ninja by Micha and me
GridCars - Our jam entry for LD31
Germanunkol.de
Top

I haven't thought that far ahead with this project, but if things go well and I want to continue, then I'd definitely consider implementing upgrades and abilities to keep the game fun.


Germanunkol wrote:I find it really annoying that I can't rotate without moving.
Why don't you always rotate to face the camera and only move when clicking?
It would make controls much easier. If you want it to be hard to navigate, you can always make the turning slower and moving faster (or acceleration/deceleration smaller). The way it's now it's more frustrating than challenging, in my opinion...

Hey, thanks for pointing that out. I've always had a feeling these controls weren't working out, but I couldn't put my finger on it. But I think I totally understand where you're coming from. I've been using these controls for over a year and have gotten so used to them that I can maneuver the character like no one's business, so it's hard to tell how others could react to them. After some play testing, I've realized that the controls just don't work well for other play styles and aren't very intuitive. This also may not work well depending on your mouse sensitivity, but I do have sensitivity scaling implemented, and can add in a feature to change it.

Here's the way I've been controlling the character: I imagine that there is a joystick centred on the character's body. I click and flick the mouse in the direction I want to go in to move the joystick. The further I move the mouse, the further the 'joystick' gets pushed down, and more thrust is applied to the character. This style of input translates well when using a joystick, but I guess not so much for a mouse, so I'll have to rework that and find something that feels natural to everyone. Hope that explanation helps you understand what I was going for.

So it looks like I've got some fixing up to do, thanks for the feedback. If you want to continue playing, the way I rotate the character without moving is to move the mouse in the direction you want to look and then make a single click to turn the character.

Also: I've realized that I've left in a bug where the window resolution is always set to 1920x1080, so that may explain fullscreen and graphics issues. I've updated the main post download to fix these problems, added in reference markers on sonar use to help with disorientation, and the screen now displays a mouse curson, but otherwise no other changes have been made yet. Sorry guys!
Top
Post Reply
10 posts • Page 1 of 1

Users browsing this forum: No registered users and 25 guests