Show off your games, demos and other (playable) creations.
Post Reply
18 posts

Note
Saved levels go to the default Love2D folder. Currently there can only be one level to save/load at a time, with the filename "dev.ADEPT".

Known bugs:
- you can sometimes avoid being crushed by a downwards moving platform by jumping at the right time, "snapping" you to the side
- horizontal springs are wonky, depending on player input to give a good boost
Neither of these are gamebreaking, but they're kinda unintuitive. To be fixed in future versions. 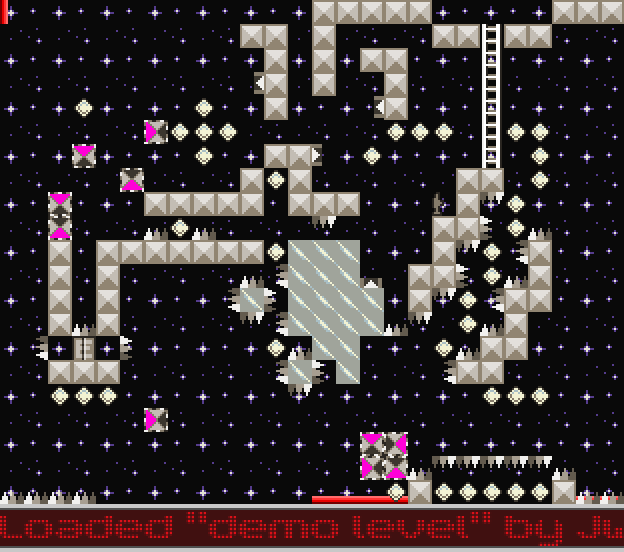 Adept is a game of competitive level design that sprung out of Ludum Dare 33.

...But this thread isn't Adept. It's just the diary of its development. (I am employed, so updates may be sporadic/weekend-only.)

The concept in a nutshell is that level design itself could be a game. That there can be an evolving "meta" of trying to outwit other players with your creations. And that the level editor itself can have a sense of challenges and progression, such as limited amounts of tiles to place.

To this end, all content in the game is player-generated and sorted using a dynamic ranking system. As players progress through levels, easier levels fall down in the ranking so that new players encounter them earlier, while levels with a low completion rate rise higher.

Additionally, when you beat a level, you obtain the tiles used to make it. With your collection of loot, you can create your own level to submit into the ranking system.

EDIT
Understanding Question: Will the player be able to create their own tiles and create levels using them?
And if so, will other players who beat your level get the tiles you created?
Top

Today I implemented saving/loading(!), multi-directional tiles, a cool LED table for announcements that would otherwise be printed into console, usability stuff, dealt with fonts, whipped up new background graphics, plus a whole bunch of lesser additions and fixes.

Since I'm on a roll, I'm just gonna fix some quirks of the existing tiles, so that playtesting is more meaningful and people might actually be able to make some cool levels straight away.


MadByte wrote:Will the player be able to create their own tiles and create levels using them? And if so, will other players who beat your level get the tiles you created?

I'm not sure what creating new tiles would be like, but the idea is that you can only ever rearrange tiles you've encountered.
curious handcrafted games
Top

Probably a good move. Hard to look at those red and beige stripes for more than about 5 seconds without wanting to strangle someone. Maybe something more low-contrast for backgrounds? Then again, I'm no art critic

I know, it's kind of overkill. Not even the colors as such, but the stripes being so narrow is what makes it look like eye razors. Especially when there's a moving object in front that your eyes are focusing on.

The other backgrounds are more low-contrast, but then there's some readability issues with certain tiles. Let's just say graphics aren't final (though that's what I always say).

The LED screen has potential to become very memorable, I feel. Guess I should embrace it and have like pinball-style animations in the future.
curious handcrafted games
Top

I just encountered the most genius bug: a falling block collided with the editor cursor, and both died in the collision. I'm kind of proud that my component system is generic enough for this to happen without fatal errors or anything.

But after I stopped laughing, I faced the fact that these are the sort of things Adept is about. Really using everything in the game's design to your advantage. I'm disabling this for now, but I have got to work that in as an intentional feature somehow.
curious handcrafted games
Top

Today I crossed off the difficult parts from my todo list for the public build. Only got three more known quirks to fix. #gethype

I also made a demo level to test and showcase some (intended) curiosities. Might as well package this with the game for you to play around with. 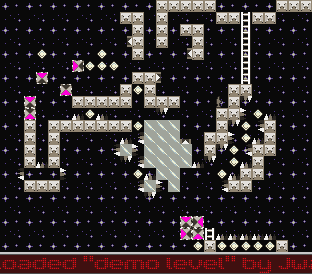 So, here it is: a build that contains a functional live editor with a subset of the upcoming tileset.

Known bugs:
- you can sometimes avoid being crushed by a downwards moving platform by jumping at the right time, "snapping" you to the side
- horizontal springs are wonky, depending on player input to give a good boost
Neither of these are gamebreaking, but they're kinda unintuitive. To be fixed in future versions.

Just go ahead and start making some levels, or check out my demo level while you're at it. Saved levels go to the default Love2D folder. Currently there can only be one level to save/load at a time, with the filename "dev.ADEPT". (Don't worry, advanced file handling is the next thing on my list.)

If you make something cool, share the level here! And if you find any bugs or come up with improvements, report them as well!
curious handcrafted games
Top

I didn't start playing yet, I would like to warn you though: your shader code doesn't work here (Linux, Intel GPU).
I tried to modify it a bit, here's a patch:

I had two errors; this is the first one:

And here's the second, after commenting out the first one:

Oh wow. I had no idea that could cause problems.

Well, the shader's not actually used in this build yet, so might as well remove it altogether. Reuploaded, thanks.
curious handcrafted games
Top
Post Reply
18 posts