Show off your games, demos and other (playable) creations.
Post Reply
3 posts • Page 1 of 1 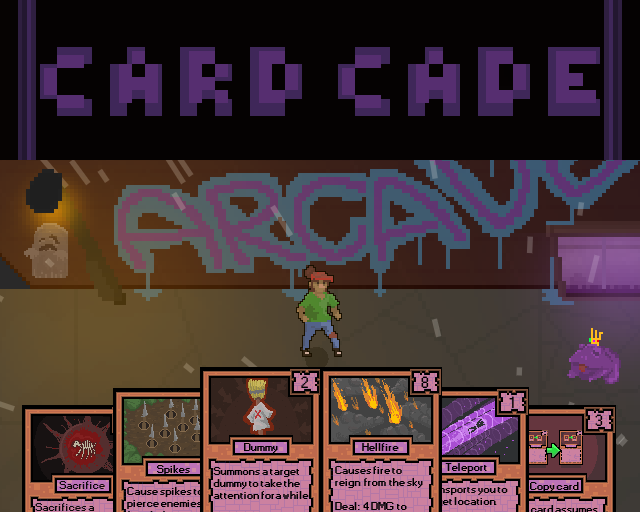 Welcome to the Cardcade, where we take you back to a better decade!

This game is a mix between a card game and dungeon crawler. Run through a dungeon, throw cards to activate them and unlock more cards as you progress through the dungeon! Find and restock your deck with NEW unlocked cards that you find in the dungeon to give you an edge over the monsters!

Controls
The future
We are happy to announce that Cardcade will be developed into a full game. After Ludum Dare ended we began working on a the game from scratch to ensure that the game can scale well without us running into issues later down the line. A big thanks to everyone who has played our entry and given us so much great feedback and valuable input.

Join our Discord server for the latest news, behind the scenes info and progress updates!
Last edited by Jeeper on Wed May 30, 2018 8:20 am, edited 3 times in total.
All of our Games
Twitter: @WindmillGames
Top

Post Jam Version
Today I pushed out the first and (most likely) final post jam version. Like I mentioned before we started from scratch but since people are still playing the version available on itch I wanted to fix some of the most glaring bugs and issues. Here are the patchnotes:

* Added the ability to select cards by pressing 1-5.
* Added the ability to select cards with the mouse scroll wheel.
* Added mouse controls to the menu and inventory.
* Added a new ranged enemy.
* Added a fullscreen option (Press F in the menu)
* Fixed a bug that would close the game when you pressed escape.
* Fixed a bug that would cause AOE spells to not deal damage to certain enemies

This is looking really nicely polished. Cool music too