Show off your games, demos and other (playable) creations.
Post Reply
8 posts • Page 1 of 1

Possession, a traditional turn-based roguelike where you play as a ghost trying to make your way to the surface, has been released for Linux, Mac, and Windows! 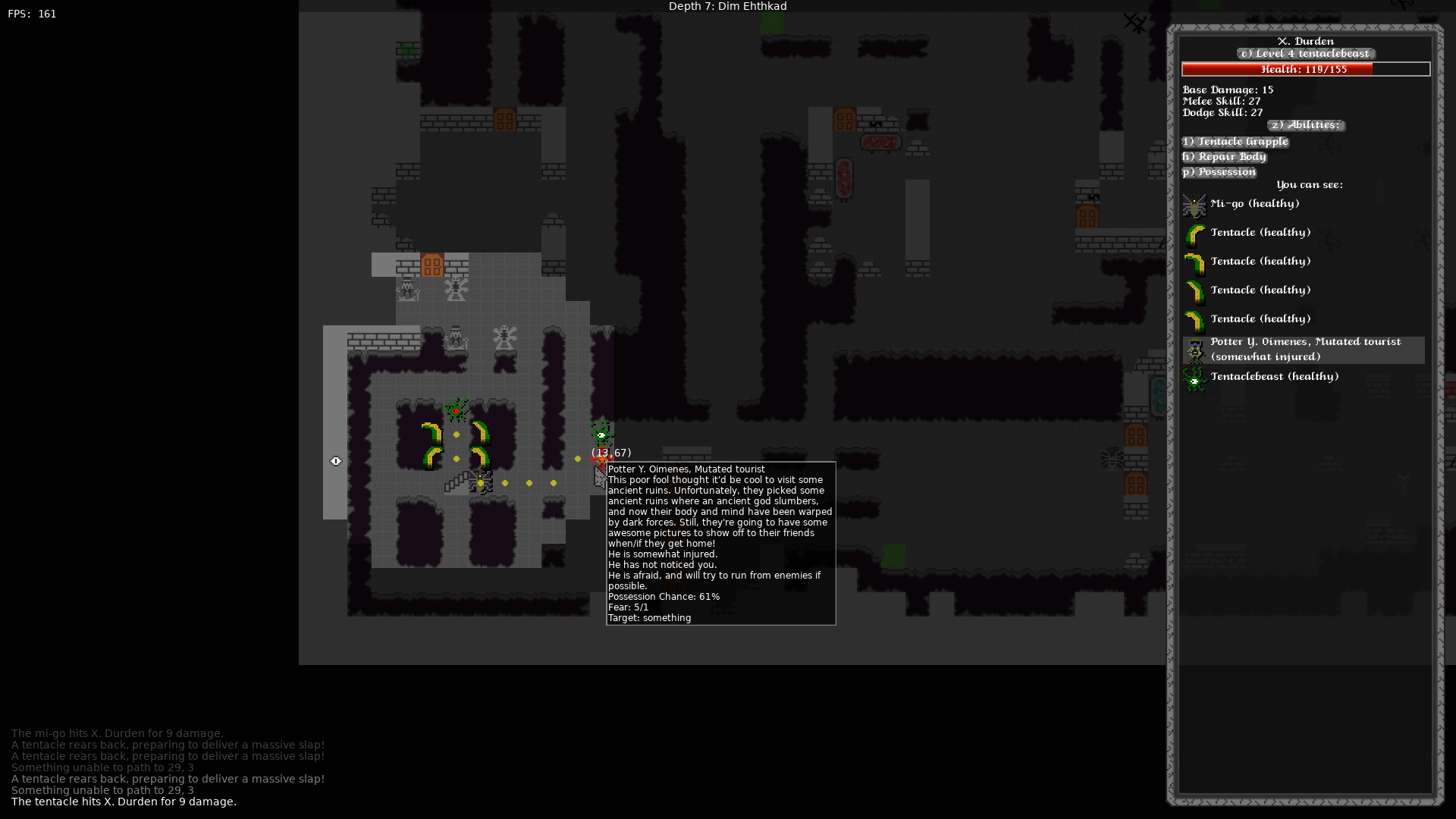 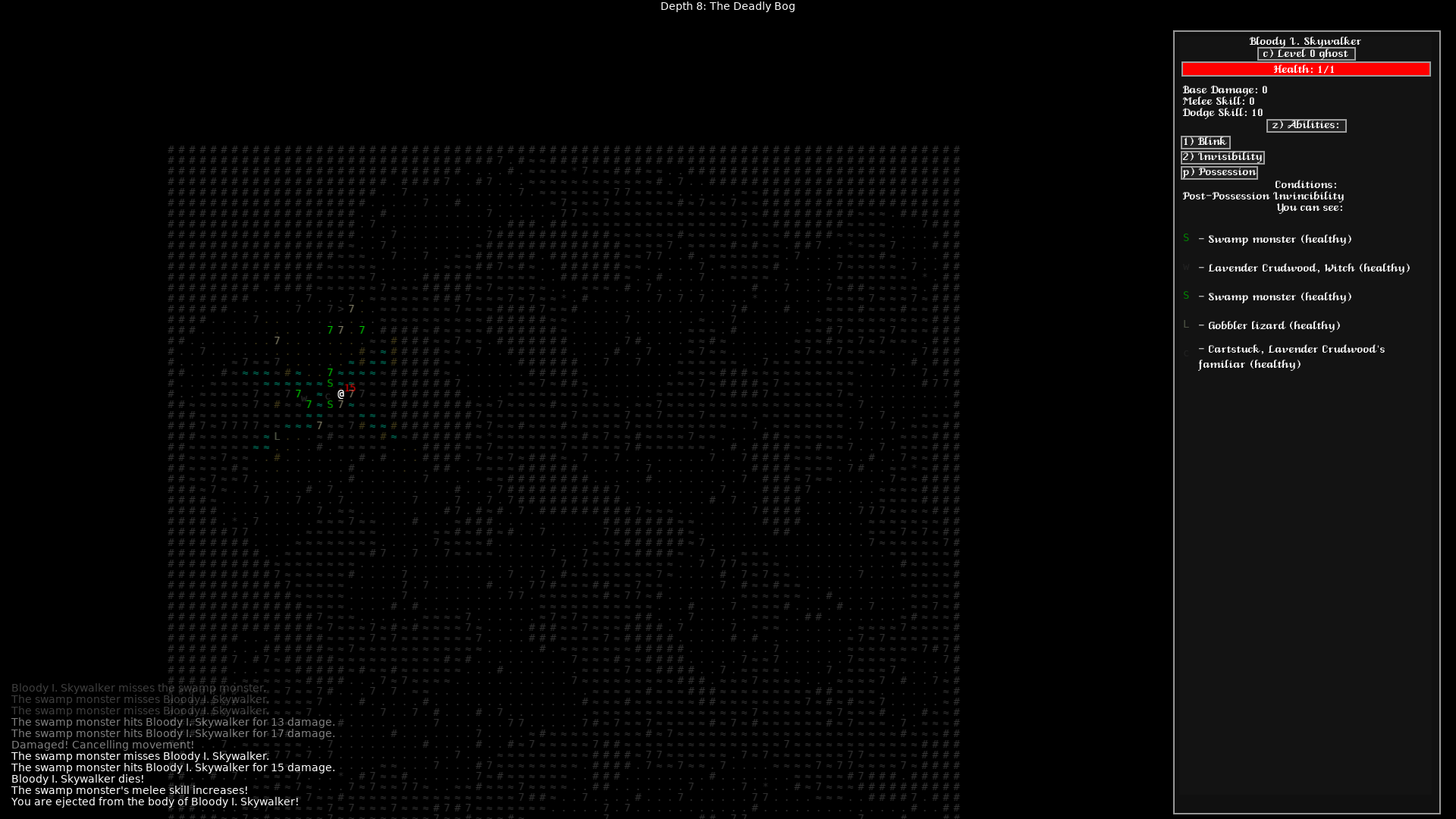 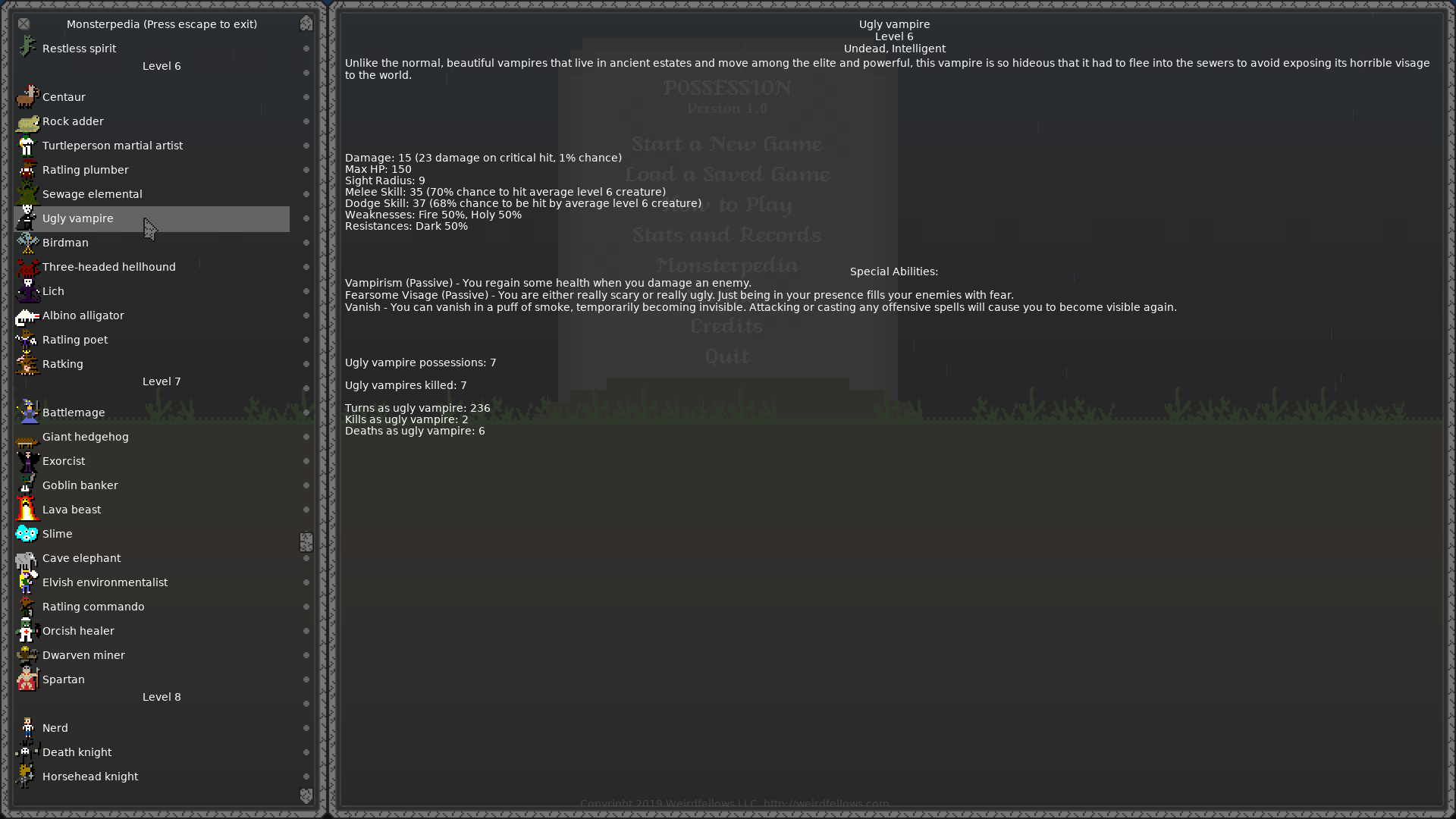 Last edited by Rickton on Fri Jan 24, 2020 9:17 pm, edited 3 times in total.
Possession - Escape from the Nether Regions, my roguelike made in LÖVE for the 2013 7-Day Roguelike Challenge
And its sequel, simply called Possession , which is available on itch.io or Steam, and whose engine I've open-sourced!
Top 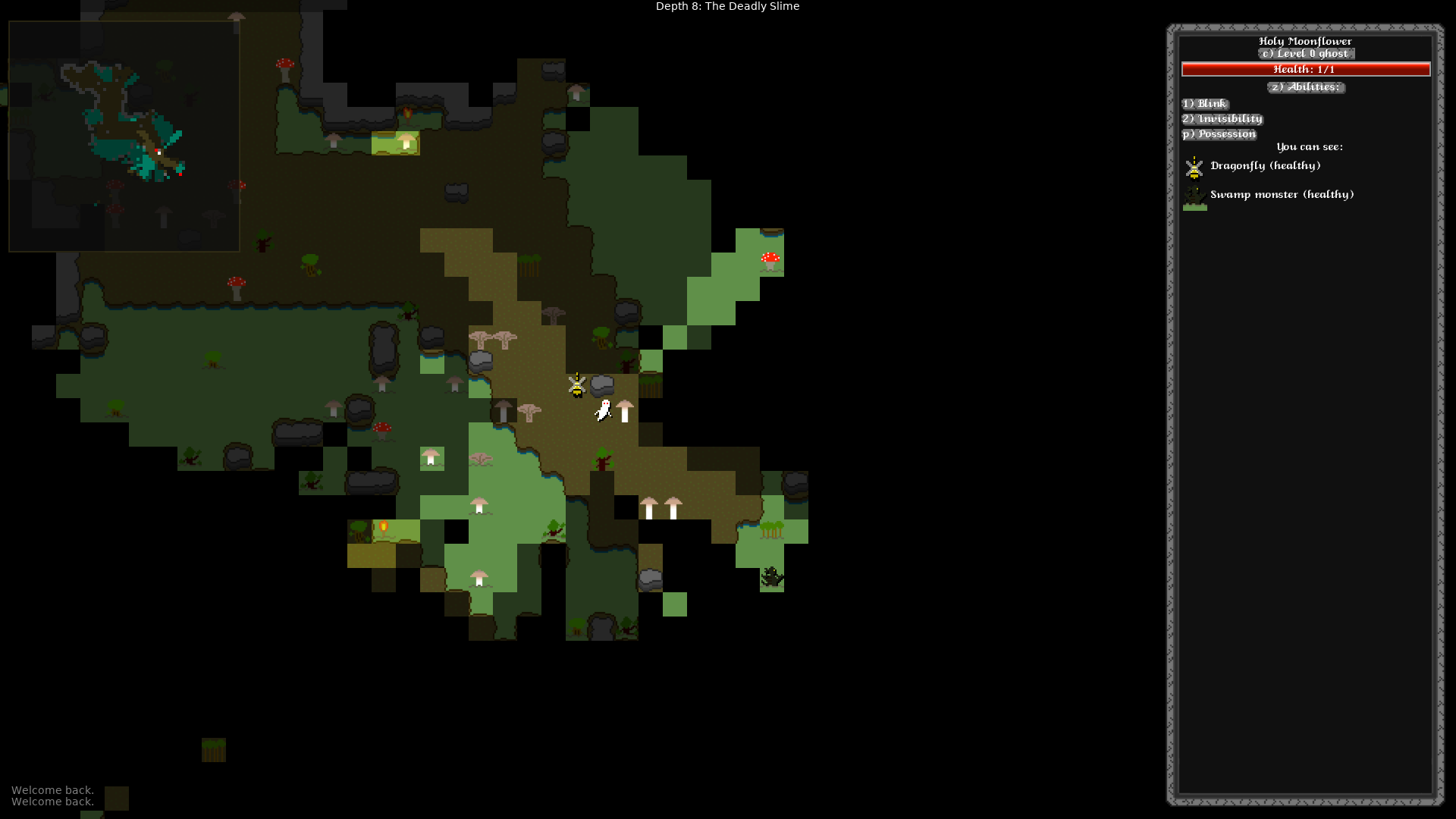 Interface Changes: Gameplay changes: Code/modding changes: Bug fixes: Steam version on Linux:
Possession - Escape from the Nether Regions, my roguelike made in LÖVE for the 2013 7-Day Roguelike Challenge
And its sequel, simply called Possession , which is available on itch.io or Steam, and whose engine I've open-sourced!
Top

Version 1.0.7 (the zoom update) is released, as well as a demo version now being available on steam


Bug fixes:
-Fixed a crash that occurred when using the scroll wheel on the spell selection screen
Possession - Escape from the Nether Regions, my roguelike made in LÖVE for the 2013 7-Day Roguelike Challenge
And its sequel, simply called Possession , which is available on itch.io or Steam, and whose engine I've open-sourced!
Top

Missed posting this, but versions 1.0.8 and 10 have been released. I'm changing the version numbers to reflect the release number, rather than sticking with semantic versioning (1.X.X), because it didn't make much sense.

If you do have it and enjoy it, please consider leaving us a review!
Possession - Escape from the Nether Regions, my roguelike made in LÖVE for the 2013 7-Day Roguelike Challenge
And its sequel, simply called Possession , which is available on itch.io or Steam, and whose engine I've open-sourced!
Top

A few versions of Possession have been released since my last post.
V11: 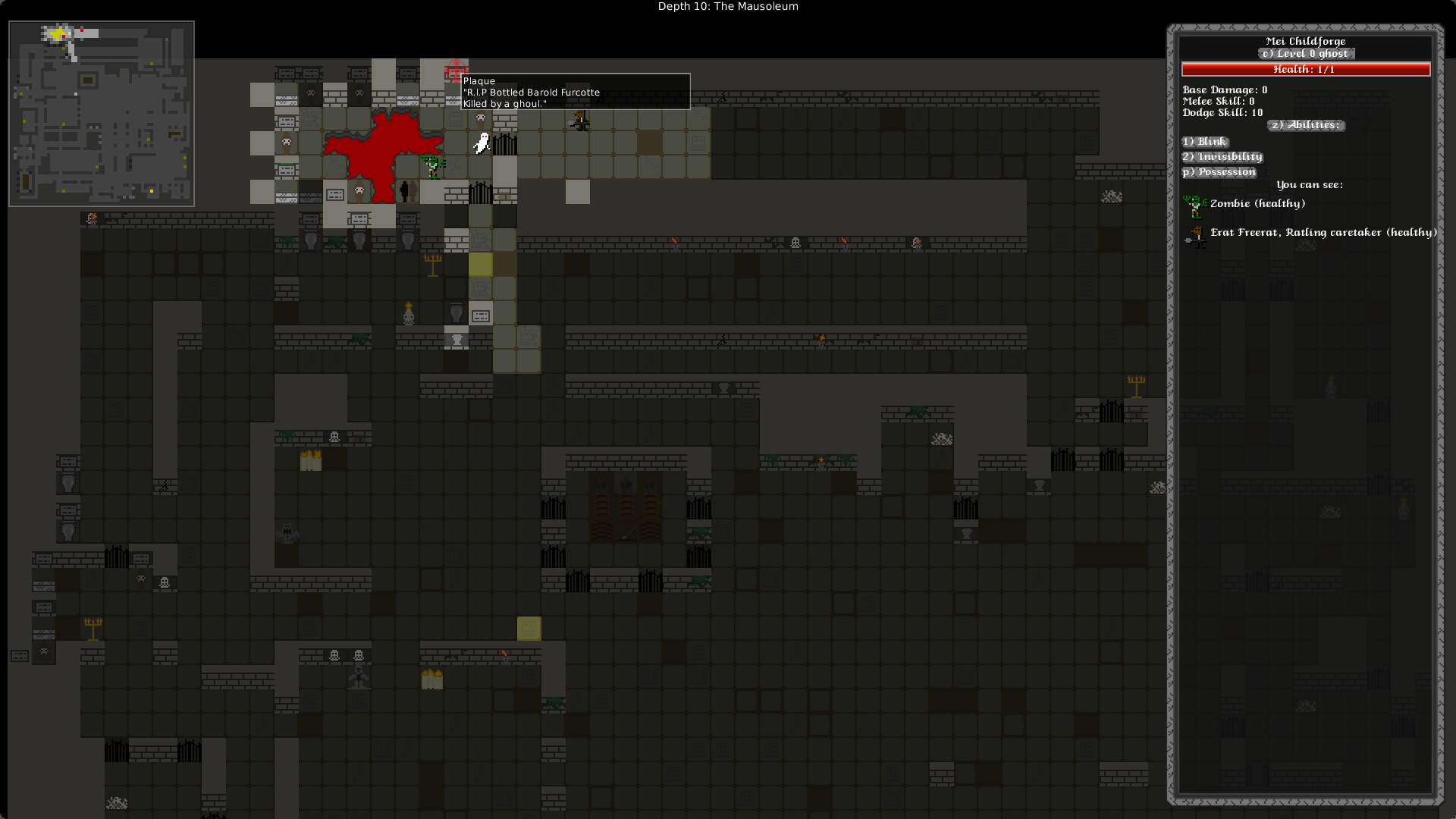 Possession is currently 25% off for the Steam Sale: https://store.steampowered.com/app/629340/Possession/
I also recently posted a "2020 in Roguelikedev" post with a retrospective on 2019 and outlook for 2020: https://www.reddit.com/r/roguelikedev/c ... ossession/
Possession - Escape from the Nether Regions, my roguelike made in LÖVE for the 2013 7-Day Roguelike Challenge
And its sequel, simply called Possession , which is available on itch.io or Steam, and whose engine I've open-sourced!
Top

I had a read through your reddit post with great interest. I'm working on my own big game project at the moment. I did play the latest build recently and those crashes I mentioned before are all gone. I don't have any trouble really regarding the gameplay. For me I just feel the UI/UX could be improved upon. The buttons in particular are a bit small and could do with some padding.

Maybe "possession" being a main action could be in a separate location too. A bigger button with a different colour and increased font size would be better imho. On top of the sidebar would do. This would encourage the player to get involved in the main gameplay aspect of the game.
Top

Fair point about the buttons. I made them that size to more easily fit them on the sidebar, but I can see how they might be too small.
Possession - Escape from the Nether Regions, my roguelike made in LÖVE for the 2013 7-Day Roguelike Challenge
And its sequel, simply called Possession , which is available on itch.io or Steam, and whose engine I've open-sourced!
Top
Post Reply
8 posts • Page 1 of 1