Now.. I have a little problem here.
I have a player and that player is going to shoot a bullet.
The bullet is going to be aimed at (goalX, goalY) but I want it to go until (actualX, actualY). How can I achieve that? 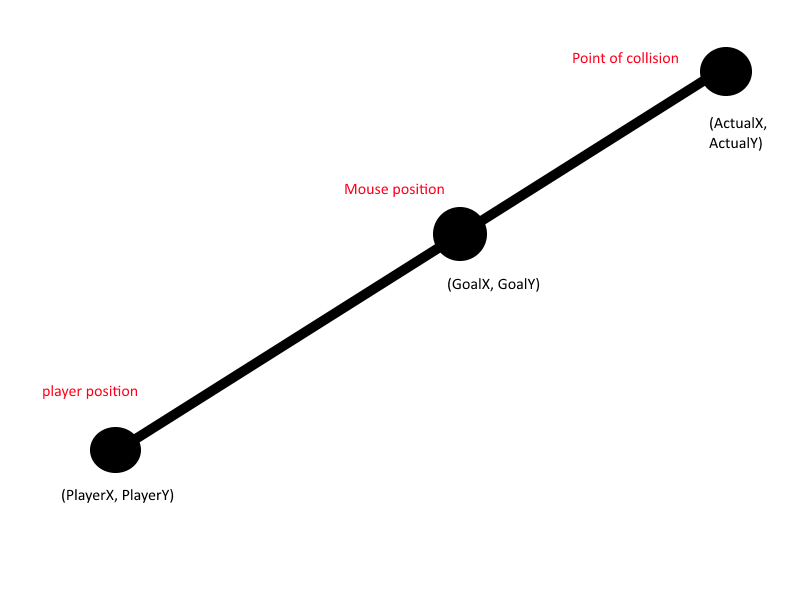 You create a vector (GoalX - PlayerX, GoalY - PlayerY), then you add this Vector to your player coordinates with a coefficient greater than one.

The point of collision will be twice as far away from the player than the mouse position.
twitter | steam | indieDB

Creating a vector by subtracting is a good start, but you'll probably also want to divide by the total distance between the "Player Point" and the "Mouse Point". Otherwise, you'll have variable speed based on how far the mouse is away from the player. Theoretically you could design this as a gameplay mechanic but it would probably be more intuitive to hold down the mouse to charge and increase the bullet's speed.

EDIT: Fixed a little thing where I had the Goal and Player subtraction round the wrong way
Last edited by Qcode on Sun Sep 13, 2015 4:06 pm, edited 1 time in total.
Top

Thatnk you guys for your replies!! I'll make good use of it.
Top

Good example by QCode.
One thing I would add is a check that avoids a possible division by 0:

A good idea is to treat positions effectively like vectors. I happen to have a module I made for myself that you can study and take ideas to make your own or simply use it if you like.
https://gist.github.com/radgeRayden/2ae ... a4f3a9c76c
Top
Post Reply
6 posts • Page 1 of 1

Users browsing this forum: No registered users and 33 guests