can you add a central alliance that acts as a dictatorship but the outer planets reject the central alliance and struggle to get by one the most basic of technologies. O and on the frontier you could have cannibalistic men called "reavers"; O and your ship could be a firefly class ship called serenity. maybe you could have various crew members; maybe a captain named "Mal", a doctor with a younger sister that was made crazy by the alliance.

ya; I'm good at making story lines, i *swear* i didn't get that from a TV show

I think your game sounds amazing magiteck, good luck with it.
My jaw literally dropped when i read your warp mechanics, such a good idea!
Dull but sincere filler.
Top

Yearly update!
I've been slacking tremendously but the project is still moving forward. 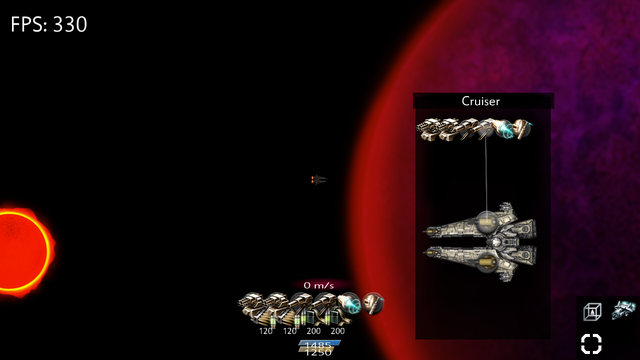 Major changes:
Ship equipment interface to change equipment quickly.
You can now load and fire weapons using the interface rather than just hotkeys.
Weaponry and modules can now load various types of ammunition.
Added a speed indicator which also displays the sectors heat level behind it.
Dynamic lighting from stars and projectiles. viewtopic.php?f=5&t=11076
Sound no longer just eats memory.
Networking much improved. Still a bit of de-sync here and there with fast ships but it's acceptable.
Time-dilation system for managing the gameworld completed. I should probably throw half a million ships at it to make sure it is really performing.
Added an options menu to alter starting conditions and also a control help panel.

I've made a whole lot of improvements to performance, to ensure the game never becomes unplayable no matter the situation you get into. Bugs are also now more-or-less extinct.
FPS averages around 300 on my laptop, and 200 in small scale battles. So performance wise things are looking great.
Unfortunately adding the aforementioned dynamic lighting may have excluded lesser machines like netbooks from running the game. The lighting will likely be a toggle-able option, but right now it isn't.

Here are two videos to show off the new lighting. Keep in mind it's a very subtle effect as I wanted to avoid over-saturating ships. It will probably change some more, but the current effect looks great in motion; even with my poorly normal-mapped textures.

My current goal is to add strategics and economics to the AI. Barring that, I really need to be working on making content for the game.
Hopefully this year I'll get a bit more done!
Top

Hey is there any update on this? This project looks pretty amazing. It seems that you worked so hard on this I was wondering if there is a prototype people can play

That's a 5 year old thread you just necroed right there my friend.
Top

Well, OP has been online 20 days ago, so I'd like to hear why the project died, does he plan on continuing it, etc.
Although I think the answer is pretty obvious.
Edit: uhh, actually a year and 20 days, oops.
Top

i mean it looks really good though... I think if he stuck with it he could of released and had lots of success... Even if he abandoned it I would love to see the src and maybe even expand upon it
Top

The art for this appears to be stolen from Starsector http://fractalsoftworks.com/ I wonder if that caused problems for him.
Top

He said he used art from other games.

I don't think it caused him problems considering he never released it.
Top

I don't think it caused him problems considering he never released it.

I think what SPlice means is that perhaps that's why he never released it.
Top
Post Reply
51 posts